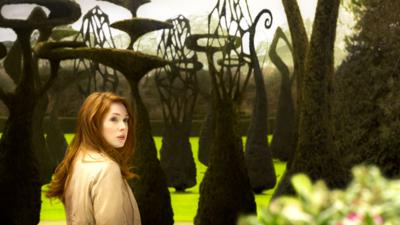 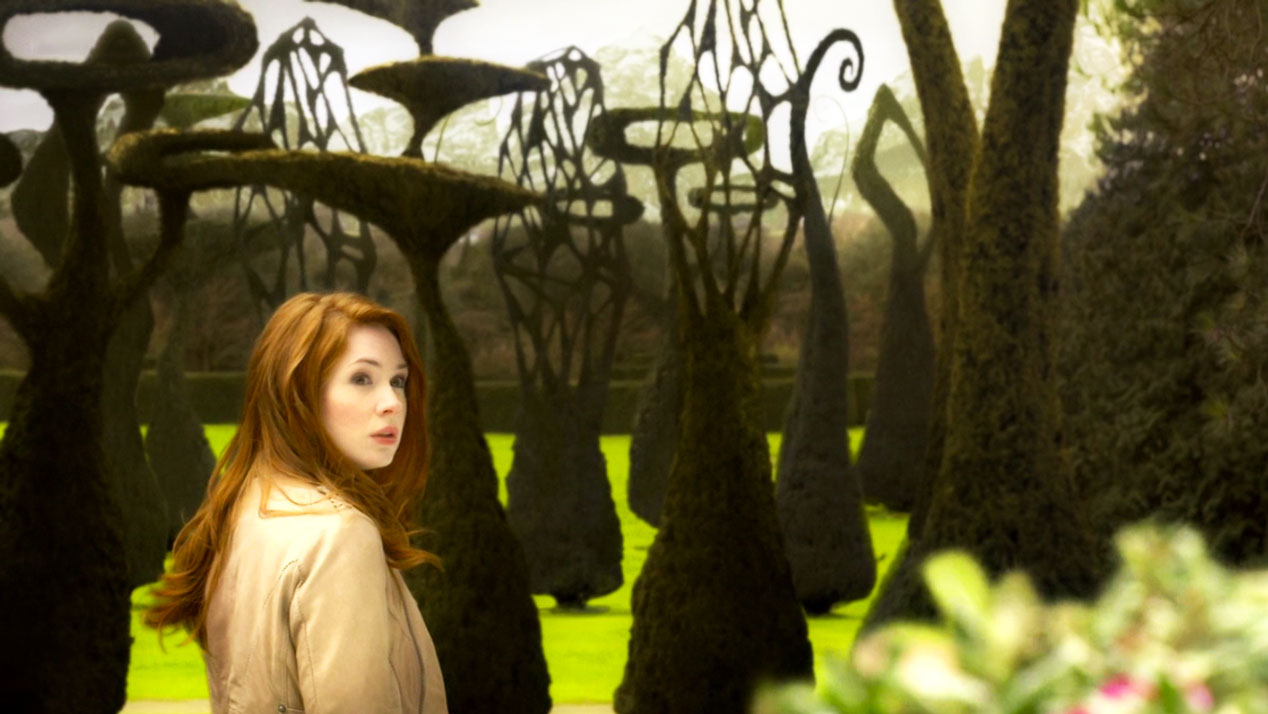 The Doctor takes Rory and Amy to the planet Apalapucia, claiming it is a top holiday destination, but is unaware that the planet is suffering from a fatal plague, Chen7, that affects beings with two hearts and can kill them within a day. The native population has created "kindness centres", where those infected by the plague are placed in one of several thousand accelerated time streams, allowing them to live out their lives whilst in communication with their loved ones through a large glass lens in the waiting room. On their arrival, Amy is separated from the Doctor and Rory, and becomes stuck in an accelerated time stream. As the Doctor and Rory discover Amy's location, they are approached by one of the facility's Handbots, a faceless white robot with human-like hands. The Handbot explains about the plague, and failing to recognise the Doctor or Rory as alien, attempts to administer a dose of medicine that would be fatal. The Doctor uses the glass lens to warn Amy of this, and tells her to wait for him in the kindness centre, promising to rescue her. The Doctor and Rory return to the TARDIS with the glass lens, which the Doctor uses to lock the time machine onto Amy's timestream. Meanwhile, Amy discovers Interface, providing vocal control over the complex's computer systems, and learns she can mask her presence from the Handbots using the emissions from the time engines driving the accelerated time streams.

The Doctor, unable to leave the TARDIS due to the plague, gives Rory the lens, his sonic screwdriver, and a pair of glasses through which the Doctor can see and communicate with Rory. Rory explores the complex, and runs into a group of Handbots. The robots are quickly defeated by a much older and more bitter Amy, who is now a vigilante with the aid of Interface, but has otherwise been unable to escape. She is angry with the Doctor, telling him she has been waiting 36 years for rescue. She has been alone except for a reprogrammed Handbot called "Rory". The Doctor realises they have mistakenly latched onto the wrong time stream, and urges the older Amy to help find her younger self. She refuses, knowing that if the younger Amy is rescued, she will cease to exist. Though Rory considers saving the older Amy, the Doctor warns him that by taking her aboard the TARDIS, they will forgo any chance of rescuing the younger Amy. The Doctor discovers evidence of younger Amy nearby, and instructs Rory to use the lens to communicate with her, hoping that seeing the younger, crying Amy will convince the older one to help with the rescue. The older Amy remembers this discussion from when she was younger Amy and had failed to convince the older Amy to help. However, this time the younger Amy convinces the older Amy to change her mind by asking her to consider Rory. The older Amy agrees to help if the Doctor would take her too; the Doctor promises to do so despite the difficulty in completing the action since the TARDIS will be unable to handle the paradox of having two Amys from different timestreams aboard together.

The Doctor temporarily brings the two Amys into the same time stream by having them synchronise their thoughts whilst having Rory manipulate the time engines. Rory's glasses begin to malfunction due to feedback from the paradox, forcing the three of them to race through the complex amongst several Handbots to reach the TARDIS without the Doctor's assistance. As they near its location, the older Amy falls back to protect the other two, but the younger Amy runs into a Handbot and is sedated. As the older Amy covers his back, Rory takes the younger Amy into the TARDIS. Once they are inside the Doctor slams the door behind them and admits to Rory that it is impossible for both Amys to exist in the same timestream. Rory must now choose which Amy he wants. Rory and the older Amy have a tearful farewell at the TARDIS door before the older Amy tells him to move on without her. The older Amy then allows herself to be taken by the Handbots. Amy wakes up and asks "Where is she?", and the Doctor leaves Rory to explain to her.