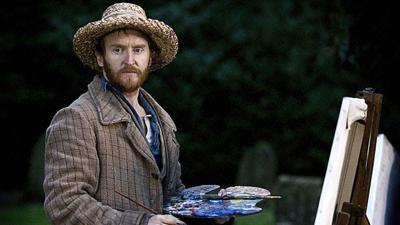 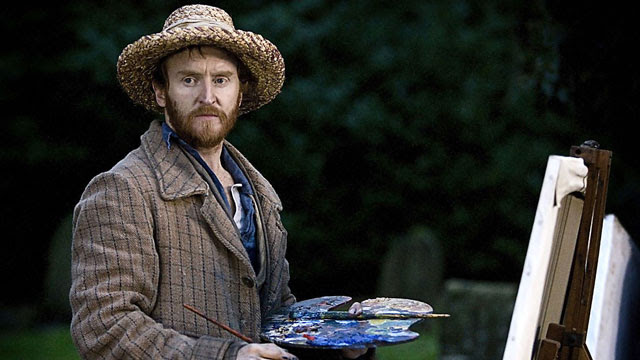 The Doctor has taken Amy to the Mus?e d'Orsay in Paris, where they admire the work of the post-impressionist painter Vincent van Gogh. The Doctor discovers a seemingly alien figure in a window of the painting The Church at Auvers, and decides they must travel back in time to speak to Vincent around when he painted the painting. In 1890, they find Vincent at a cafe in Arles, a lonely man with a bad reputation. Vincent opens up when he notices Amy, sensing a loss she herself is not aware of. They discover that recent murders, the victims ravaged by some type of beast, have been blamed on Vincent, and the two resolve to help him.
At Vincent's home that evening, the artist confesses that his works have little value to anyone else, but he believes the universe is filled with wonders that he must paint. Amy is attacked by an invisible beast that Vincent is able to see and sketch for the Doctor, who identifies it as a Krafayis, a vicious pack-predator likely abandoned on Earth. Knowing the beast will appear when Vincent paints the nearby church the next evening, the Doctor and Amy plan to join him, after which they will leave. Vincent becomes distraught at this news and shuts himself in his bedroom, saying that everyone leaves him in the end. The Doctor and Amy set out to capture the beast, but Vincent soon joins them, eager to help. He confides to Amy that if she can "soldier on, then so can Vincent van Gogh".
Vincent begins creating the painting of the church and soon spots the beast inside. The Doctor demands that Amy stay back as he enters the church alone, but she and Vincent both agree they should help the Doctor. Vincent is able to save the Doctor and Amy, describing the beast's actions as they hide in the confessionals; the Doctor soon realises from Vincent's description that the beast is blind, the likely reason it was abandoned. The beast is impaled on Vincent's easel when it tries to lunge at the artist. The Doctor attempts to soothe the dying creature while Vincent empathises with its pain. After the creature dies, the three return outside the church, and Vincent describes the night sky as he envisions it: deep blue, framed by swirling air.
The next day, the Doctor and Amy prepare to leave. Vincent asks Amy to return and marry him should she leave the Doctor. As Vincent turns to leave, the Doctor offers to show him something. The Doctor and Amy take Vincent in the TARDIS to the present and the van Gogh exhibit at the Mus?e d'Orsay. Vincent is stunned at the display, and becomes emotionally overwhelmed when he overhears Mr. Black (Bill Nighy), an art curator, say that van Gogh was "the greatest painter of them all" and "one of the greatest men who ever lived". They return an emotionally changed Vincent back to the past and say their final goodbyes. As the Doctor and Amy return to the present, Amy hopes that there will be several more paintings by Vincent waiting for them, but instead learn that Vincent still committed suicide at the age of 37. The Doctor explains that life is a mixture of bad and good, and while their brief encounter with Vincent couldn't undo everything wrong, they added some good to his life. The evidence is in Vincent's displayed works: the face no longer appears in The Church, and now Vase with 12 Sunflowers bears the inscription, "For Amy".