< Sting of the Zygons
Wooden Heart > 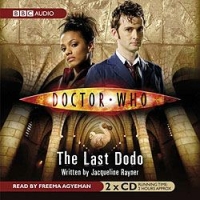 Freema Agyeman reads this spine-tingling story of a bizarre museum, extinct animals and danger for the Doctor. The Doctor and Martha go in search of a real live dodo, and are transported by the TARDIS to the mysterious Museum of the Last Ones. There, in the Earth section, they discover every extinct creature up to the present day, all still alive and in suspended animation. Preservation is the museum's only job - collecting the last of every endangered species from all over the universe. But exhibits are going missing...Can the Doctor solve the mystery before the museum's curator adds the last of the Time Lords to her collection? This title features the Doctor and Martha, as played by David Tennant and Freema Agyeman in the hit series from BBC Television.