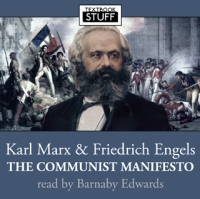 From textbookstuff.com:
Karl Marx (1818–83) and Friedrich Engels (1820–95) published their Manifesto of the Communist Party in February 1848 on the eve of the Berlin and Paris revolutions. Originally commissioned by the Communist League to set out their aims and methods, The Communist Manifesto rapidly became one of the world's most influential political manuscripts.

Told in four sections, the Manifesto analyses the history of the class struggle, delineates the current state of affairs in Europe and America, scrutinizes the writings of other so-called communists and socialists, and proposes a method for bringing into reality the Marxist ideals of classless equality and a centralized State.