1.1 - Charles Dickens - The Signalman and Other Ghostly Tales 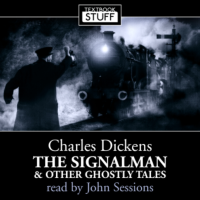 The five stories collected here encompass haunted railway lines, Christmas goblins, figures stepping out of nightmares, a child murderer, and an extraordinary encounter between a spectre and a canny lawyer.

STORIES:
The Signalman
The Story Of The Goblins Who Stole A Sexton
To Be Read At Dusk
A Confession Found In A Prison In The Time Of Charles The Second
The Lawyer And The Ghost