< Twice Upon a Time
The Maze of Doom > 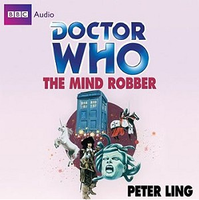 
To escape a catastrophic volcanic eruption the Doctor takes the TARDIS out of space and time - and into a void he can only describe as ‘nowhere’. But the crisis is far from over, and when the time-machine’s circuits overload, the TARDIS explodes. The Doctor, Jamie and Zoe come to in a dark unearthly forest. There they encounter a host of characters who seem somehow familiar: a beautiful princess with long flaxen hair, a sea traveller dressed in eighteenth-century clothes, and a white rabbit frantically consulting his pocket watch... What is happening to the three time-travellers? What strange power guides their actions? In the Land of Fiction who can really tell? Derek Jacobi, who played The Master in the Doctor Who episode Utopia, reads Peter Ling’s complete and unabridged novelisation, first published by Target Books in 1986. ‘BBC Audiobooks has chosen well with its books and has taken the right approach with its readers... they benefit from new music and sound effects' - Doctor Who Magazine.