< The King's Demons
Doctor Who and the Invasion of Time >

Doctor Who and the Invisible Enemy 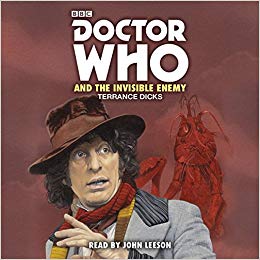 John Leeson stars in this exciting novelisation of a classic adventure for the Fourth Doctor - and the introduction of K9.

A mysterious cloud drifts menacingly through space, and the Doctor becomes infected with the Nucleus of a malignant Virus that threatens to destroy his mind. Meanwhile, on Titan, human slaves prepare the Hive from which the Virus will swarm out and infect the universe. In search of a cure, Leela takes the Doctor to the Bi-Al Foundation, where they make an incredible journey into the Doctor’s brain in an attempt to destroy the Nucleus.

Can the Doctor free himself from the Nucleus in time to reach Titan and destroy the Hive? Luckily he has help in the strangely dog-like shape of a mobile computer called K9…

John Leeson, who was the Voice of K9 in the TV series, reads this unabridged novelisation of the 1977 television serial.

Penguin
*Amazon and Book Depository affiliate link purchases help fund continued development of TheTimesScales website. So if you make a purchase using these Amazon or Book Depository links, thank you for your support!
Reviews
My Rating/Review
Log in to submit Rating and Review.