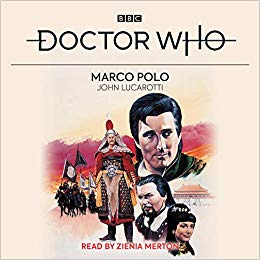 "Merton brings a lightness of touch to her reading that's quite delightful...It's a rewarding listen, and a fine tribute to its narrator." Doctor Who Magazine

The young Venetian, Marco Polo, is on his way to the Emperor’s court in Peking when he meets four intrepid time travellers: the elderly Doctor, his granddaughter Susan, and their companions Ian and Barbara.

The TARDIS has broken down whilst on Earth, in the year 1289. Marco Polo recognises in it a means of winning favour with the Emperor, and he insists that the travellers accompany his caravan to Cathay.

The journey is fraught with sandstorms, drought, bandits, would-be assassins and many other hidden dangers. Even if they do arrive safely at the court of Kublai Khan, the Doctor and his friends have no guarantee of ever seeing the inside of the TARDIS again…

Zienia Merton, who played Ping-Cho in the original BBC serial, reads John Lucarotti’s own novelisation of his 1964 TV adventure.

Dedicated to the memory of Zienia Merton