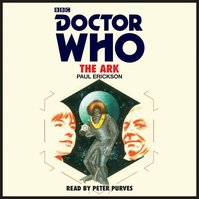 An unabridged reading of this exciting novelisation of a First Doctor television adventure.

It is ten million years in the future, and the Earth is about to plunge into the Sun. A gigantic Space Ark has been launched, to take the last of humanity to a new life on the planet Refusis II. Accompanying the humans on their journey are the Monoids, strange reptilian creatures from an alien world.

When the TARDIS materialises on board, the Doctor and his friends are greeted with suspicion, which soon turns to open hostility when Dodo inadvertently infects the Ark's crew with a long-forgotten virus. It is an accident which will have a terrible effect on mankind, an effect which will last for seven hundred years...