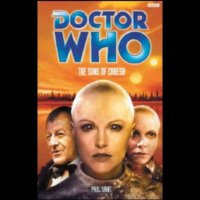 Jo gripped the sides of the console. Even over the roar of the engine she could hear branches whipping and snapping against the TARDIS exterior.

The view on the scanner was receding at the speed of an express train. It showed the swathe of destruction they were leaving behind them, a ragged, police-box-shaped tunnel through the forest.

In England a hotel worker has been turned to stone, an ancient lake has vanished, and the inmate of a mental hospital is being terrorised by unseen creatures. In Israel, in the shadow of Masada, an archaeological dig unearths something that should have stayed buried.

The Doctor is sure he is dealing with a local and relatively straightforward temporal anomaly. Troy Game, a refugee from the planet Caresh, is not so certain. She believes the impending destruction of her home world is somehow linked to the events on Earth, and she is pinning her hopes on the Doctor to avert the catastrophe.

But can the Doctor interfere with a planet's destiny? And should he risk his new-found freedom to do it?