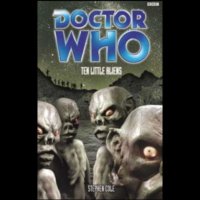 Far out in space, on the ragged edges of Earth's bloated empire, an elite unit of soldiers is on a training mission. But deep in the heart of the hollowed-out planetoid that forms their battleground, a chilling secret waits to be discovered: ten alien corpses, frozen in time at the moment of violent, bloody death.

The bodies are those of the empire's most wanted terrorists, and their discovery could end a war of attrition devastating the galaxy. But is the same force that slaughtered them still lurking in the dark tunnels of the training ground? And what are its plans for the people of Earth?

When the Doctor arrives on the planetoid with Ben and Polly, he soon scents a net tightening about them. And as the soldiers begin to disappear one by one, paranoia spreads; is the real enemy out there in the darkness, or somewhere among them?