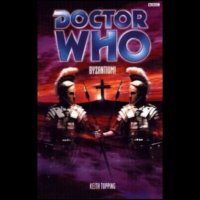 Byzantium. The imperial city — rising dramatically, as if by a trick of the light, from the peninsula of the Bosphorus and the Black Sea. Its domes and towers and minarets overlook a place of intrigue, lust, power, oppression, resistance and murder.

Romans, Greeks, Zealots, Pharisees ... all meet in the market squares of the great city, but mutual loathing and suspicion are rife.

Into this cauldron, the Doctor and his companions arrive, expecting to view the splendour and civilisation of the Roman Empire. But events cast them into a deadly maelstrom of social and political upheaval. In the eye of the hurricane they must each face the possibility of being stranded, alone and far from their own times, in an alien culture bunker.