< The Devil Goblins from Neptune
The Ultimate Treasure > 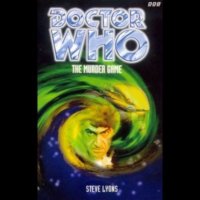 The faded glamour of a hotel in space, spinning in an all-but-forgotten orbit round the Earth, is host to some unusual visitors this weekend — including a party that claim to travel in a battered blue police box...

It is the year 2146. Answering a distress call from the dilapidated Hotel Galaxian, the TARDIS crew discover a games enthusiast is using the hotel to host a murder-mystery weekend. But it seems someone from his motley group of guests is taking things a little too seriously.

While the Doctor, Ben and Polly find themselves joining in the shadowplay, it becomes clear that a real-life murderer is stalking the dark, disused corridors of the Galaxian. But worse than this: there's a sinister force waiting silently in space for events to unfold. A terrible secret is hidden on board the Galaxian, and if it is discovered nothing — least of all murder — will ever be the same again. If this is a game, the stakes just got higher.