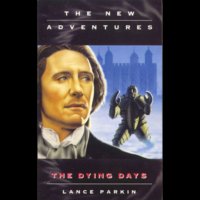 The Dying Days of the Twentieth Century

On the Mare Sirenum, British astronauts are walking on the surface of Mars for the first time in over twenty years. The National Space Museum in London is the venue for a spectacular event where the great and the good celebrate a unique British achievement.

In Adisham, Kent, the most dangerous man in Britain has escaped from custody while being transported by helicopter. In Whitehall, the new Home Secretary is convinced that there is a plot brewing to overthrow the government. In west London, MI5 agents shut down a publishing company that got too close to the top secret organisation known as UNIT. And, on a state visit to Washington, the British Prime Minister prepares to make a crucial speech, totally unaware that dark forces are working against him.

As the Eighth Doctor and Professor Bernice Summerfield discover, all these events are connected. However, soon all will be overshadowed.