So Vile a Sin 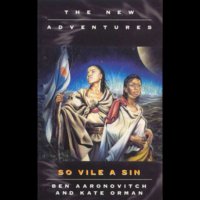 "If you step into history," said the Doctor, "I won't be able to protect you."

The Earth Empire — the Imperium Humanum, upon which a thousand suns never set — is dying.

The Great Houses of the Empire manoeuvre and scheme for advantage; alliances are made; and knives flash in the shadows. Out among the moons of Jupiter, another battle is just beginning, as an ancient brotherhood seeks limitless power and long-overdue revenge.

The Doctor returns to the thirtieth century, searching for the source of a terrifying weapon. He fears a nightmare from his own past may be about to destroy the future. Nothing must be allowed to get in his way.

But the Doctor has reckoned without the power of history — which has its own plans for the wayward daughter of the House of Forrester.