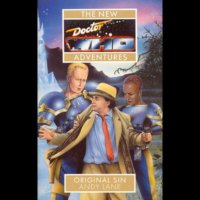 "I'm playing with a fire so dangerous I could scorch eternity."

The last words of a dying alien send the Doctor and Bernice to thirtieth-century Earth in an attempt to avert an unspecified disaster. Before they can even unpack they’ve been arrested by the Adjudicators and sentenced to death by the Imperial army. Their attempts to prove their innocence take them from the mosaic planet Purgatory to a prison inside a star.

Meanwhile, Adjudicators Roz Forrester and Chris Cwej have their own problems. Investigating a series of apparently motiveless murders, they have stumbled upon a conspiracy with sinister overtones. On the run and out of luck, the only people they can turn to are their chief suspects: the Doctor and Bernice.

And as they run, someone is watching them. Someone who knows the Doctor of old...