< Revelation of the Daleks
Mindwarp > 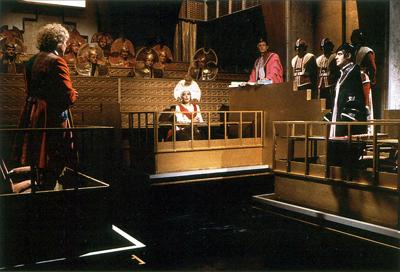 The TARDIS is drawn to a space station where the Doctor is subjected to a Time Lord inquiry into his behaviour, presided over by an Inquisitor. The prosecuting counsel, the Valeyard, presents the first piece of his evidence, which consists of a recording played back on a screen linked to the Matrix. It concerns a visit by the Doctor and Peri to the desolate planet Ravolox, which turns out to be a future Earth, shifted light-years through space.

The court watches as the pair get caught up in a conflict between the surface-dwelling Tribe of the Free, led by Queen Katryca, and the planet's other inhabitants, a group of subterranean technocrats and their robotic ruler Drathro.

Two shady off-worlders, Glitz and Dibber, are meanwhile attempting to appropriate from Drathro some mysterious 'secrets' - details of which are censored from the Matrix record. The 'secrets' are eventually destroyed, along with Drathro, as a result of the Doctor's actions.