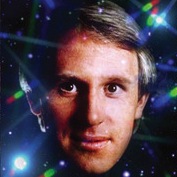 The TARDIS attaches itself to a space liner after Turlough, still under the Black Guardian's influence, damages its controls. The Doctor and Nyssa meet two space pirates, Kari and Olvir, who have come on board the liner in search of plunder, while Tegan and Turlough get lost in the infrastructure.

The liner docks with what appears to be a hulk floating in space. This is Terminus, which claims to offer a cure for lazar disease. It is crewed by a group of armoured slave workers, the Vanir, while the cure is administered by a huge dog-like creature known as the Garm. Nyssa, who has contracted the disease from sufferers transported aboard the liner, discovers that the cure - involving exposure to radiation - does actually work. T

he Doctor and Kari meanwhile learn that the ship, once capable of time travel, was responsible for the creation of the universe when an ejection of fuel from one of its engines caused the 'big bang'. Aided by Kari and the Garm, the Doctor is able to disconnect a still active but damaged engine that is on the point of exploding - something that could result in the universe's destruction.