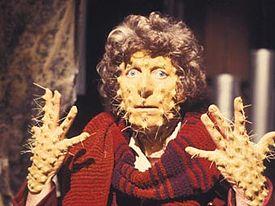 The Doctor is invited to visit the planet Tigella by its leader, Zastor, who has become concerned about disputes between his people's two opposing factions, the religious Deons and the scientist Savants.

The TARDIS is intercepted by the megalomaniacal xerophyte Meglos, last survivor of the planet Zolfa-Thura, and trapped in a chronic hysteresis - a time loop - but the Doctor and Romana manage to free it.

Meglos, using the body of a kidnapped Earthling, transforms himself into a duplicate of the Doctor and steals the Tigellans' power source - a mysterious dodecahedron. He plans to use this to power an apocalyptic device with which he intends to destroy Tigella.

The Doctor, although hindered by the activities of a group of Gaztak mercenaries hired by Meglos, ultimately brings about the xerophyte's destruction by tampering with the dodecahedron's controlling computers.