< City of Death
Nightmare of Eden >

The Creature from the Pit 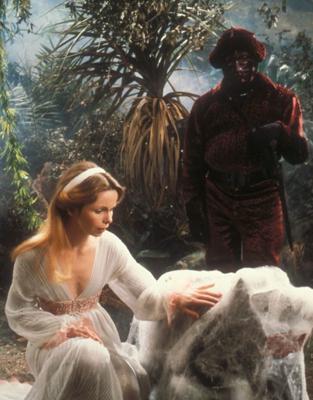 The Doctor and Romana receive a distress signal and arrive on Chloris, a lush and verdant world that has only small quantities of metals, all of which are controlled by its ruler, Lady Adrasta. Adrasta keeps order with the aid of her Huntsman and his wolfweeds - mobile balls of vegetation - while a band of scruffy thieves, led by Torvin, organize raids on her palace to steal whatever metal they can.

The Doctor identifies the distress signal's source as a large eggshell-like structure in the forest. He is taken prisoner by Adrasta's guards and, in order to escape, leaps into the Pit - the entrance to a cave system into which all those who incur Adrasta's wrath are consigned to be devoured by an immense green globular creature living within. The Doctor, with the aid of the elderly soothsayer Organon, discovers that the creature is not an unthinking killer but an ambassador from the planet Tythonus, which has a lack of chlorophyll but an abundance of metal.

The Tythonians had hoped to trade with Chloris, but the first person their ambassador Erato encountered on arriving in his eggshell-like ship was Adrasta, who took his communicator device and trapped him in the Pit so as to preserve her monopoly on metal. Erato retrieves his communicator and kills Adrasta.

He then warns the Doctor that the Tythonians have set a neutron star on a collision course with Chloris in retaliation for his imprisonment. With the Doctor's help he is freed from the Pit and, out in space, spins an aluminium shell around the star, allowing for it to be pulled off course by the TARDIS's gravitational tractor beam and thus saving Chloris.