< The Sun Makers
The Invasion of Time > 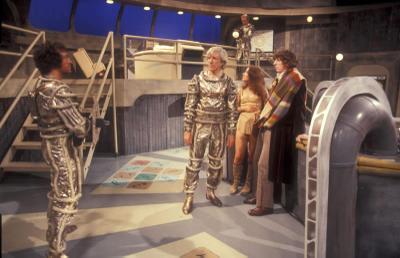 The TARDIS arrives on a Minyan space craft, the R1C, commanded by a man named Jackson. Jackson and his crew are on a long quest to recover the Minyan race banks from a ship called the P7E which left their planet centuries ago. The Doctor helps to free the R1C after it becomes buried in a meteorite storm, but it then crashes into another newly-formed planet.

Inside the planet is a system of caves at the heart of which is the P7E. The P7E's computer, the Oracle, was programmed to protect the race banks but subsequently went insane and - with the aid of its robotic servants, the Seers - imposed its rule upon the Minyan survivors and their descendants. It allows Jackson to take what appear to be the race banks, but they are actually imitations containing fission grenades.

The Doctor realises the deception and obtains the genuine race banks. He then tricks the Oracle's guards into taking the grenades back to their leader. The resulting explosion destroys the planet and the P7E and boosts the R1C off on a voyage to Minyos II, carrying with it the Minyan survivors.