< The Green Death
Invasion of the Dinosaurs > 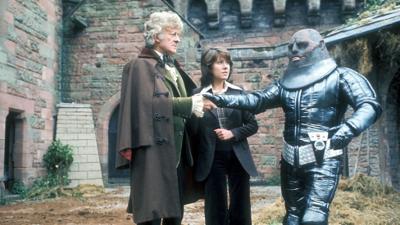 Journalist Sarah Jane Smith is impersonating her aunt, virologist Lavinia Smith, in order to gain access to a research centre where top scientists are being held in protective custody while UNIT investigates the disappearance of a number of their colleagues. The missing scientists have been kidnapped by a Sontaran, Linx, and taken back to medieval England, where they are working under hypnosis to repair his crashed spaceship.

The Doctor follows in the TARDIS, and Sarah stows away. In return for shelter, Linx has provided a robber baron called Irongron with anachronistically advanced weapons to use in attacks on neighbouring castles.

The Doctor helps Sir Edward of Wessex to repel one such attack, then he and Sarah conspire to drug the food in Irongron's kitchens so that the weapons can be removed while the men are unconscious. Aided by one of the kidnapped scientists, Rubeish, he then sends the others back to the 20th Century using Linx's primitive time travel equipment.

Linx shoots Irongron down and gets ready to leave in his repaired ship. Hal, one of Sir Edward's archers, fires an arrow into the vulnerable probic vent at the back of his neck, killing him. The Doctor, Sarah and Hal escape just before the ship explodes, destroying the castle.