< The Three Doctors
Frontier In Space > 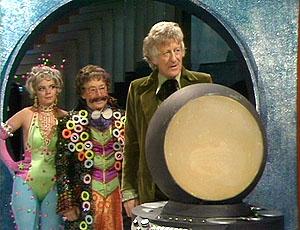 The Doctor and Jo take the TARDIS on a test flight. They arrive on a cargo ship, the SS Bernice, that appears to be crossing the Indian Ocean in 1926 but is in fact trapped inside a Miniscope - a banned peepshow of miniaturised life-forms - on the planet Inter Minor. They enter another section of the scope but find themselves confronted by ferocious Drashigs.

The Doctor eventually breaks out of the scope and returns to full size. The device is owned by a pair of Lurman entertainers, Vorg and Shirna, who hope to make a quick profit from Inter Minor's hitherto reclusive natives. They have run into trouble, however, as the bureaucratic Minorians are dissatisfied with their credentials.

The Doctor's efforts to rescue Jo from the scope, which is on the point of breaking down, are hampered by the schemes of two Minorians, Kalik and Orum, who plan to dupe their superior, Pletrac, and overthrow the planet's president, Zarb, by allowing the Drashigs to escape.

Vorg destroys the Drashigs with an eradicator weapon and the Doctor, by linking the scope to the TARDIS, manages to return all the exhibits to their points of origin. Jo materialises beside the wrecked device, and she and the Doctor then depart in the TARDIS.