< Day of the Daleks
The Sea Devils >

The Curse of Peladon 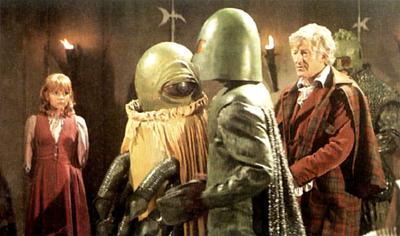 The Doctor and Jo make a test flight in the TARDIS and arrive on the planet Peladon. Seeking shelter, they enter the citadel of the soon-to-be-crowned King Peladon, where the Doctor is mistaken for a human dignitary summoned to act as Chairman of a committee assessing an application by the planet to join the Galactic Federation.

The other committee members - Alpha Centauri, Arcturus and the Martian Lord Izlyr and his Warrior subordinate Ssorg - have already arrived, but are disconcerted by the death of one of the King's advisors, Chancellor Torbis. High Priest Hepesh, who opposes the union with the Federation, attributes Torbis's death to the Curse of Aggedor, the sacred beast of Peladon. Other incidents occur and the Doctor concludes that a saboteur is at work.

At first he suspects the Ice Warriors, but the guilty parties are eventually revealed to be Hepesh and Arcturus. Arcturus has convinced Hepesh that the Federation would only exploit Peladon for its mineral riches, whereas this is in fact his own race's intention. Arcturus is destroyed with a blast from Ssorg's sonic gun, but Hepesh escapes into a network of tunnels beneath the citadel, where he foments rebellion amongst the guards. The rebels storm the citadel and take the King prisoner.

Hepesh then orders Aggedor - a real beast he has been using for his own ends - to kill the Doctor. The Doctor, however, has tamed Aggedor, and it is Hepesh who dies.